Named to Time’s “100” Most Influential list and awarded “Outstanding Chef” by the James Beard Foundation, José Andrés is an internationally-recognized culinary innovator, passionate advocate for food and hunger issues, author, educator, television personality and chef/owner of ThinkFoodGroup. TFG is the team responsible for renowned dining concepts in Washington, DC, Las Vegas, Los Angeles, Miami and Puerto Rico, including minibar by josé andrés, Jaleo and the Bazaar by José Andrés at the SLS Hotel Beverly Hills, Las Vegas and South Beach.

Chef and owner of two Massachusetts restaurants: Rialto and TRADE. Adams is a James Beard Award winning chef who has been seen competing on BRAVO’s Top Chef Masters (Season Two). Adams is a chef who is equally inspired by and versatile in cooking with New England and international ingredients.

Tom hardly requires an introduction as America’s most visible chef and host of Top Chef. A five-time James Beard Award Winner and owner of 24 restaurants, Tom has also written three cookbooks and continues to be an outspoken advocate for anti-hunger initiatives and better food policy in America.

Hesser is a co-founder of Food52, which has won both the James Beard Awards’ Publication of the Year and the IACP's Best Culinary Website, and she's been named one of the 50 most influential women in food by Gourmet. Before Food52, Hesser was the food editor at the Times Magazine. She has written several books, including The Essential New York Times Cookbook, which was a Times bestseller and the winner of a James Beard award. She played herself in Julie & Julia.

Tim has been listed as one of Fast Company’s “Most Innovative Business People”, Forbes Magazine’s “Names You Need to Know,” and is the 7th “most powerful” personality on Newsweek’s Digital 100 Power Index for 2012. He is an angel investor/advisor (Uber, Facebook, Twitter) and author of the following New York Times Bestselling books The 4-Hour Work Week, The 4-Hour Body, and The 4-Hour Chef.

Author of the award-winning Burma: Rivers of Flavor and co-author of six other cookbooks including two James Beard Cookbooks of the Year: Hot Sour Salty Sweet and Flatbreads & Flavors.

Kimball founded the Who’s Who of Cooking in America, which was initiated to honor the leading American chefs, restaurateurs, vintners, food writers, and food producers. Kimball also serves as publisher and editor of Cook’s Illustrated and also hosts the syndicated PBS cooking shows America's Test Kitchen and Cook's Country from America's Test Kitchen.

Jeffrey is a co-founder of ‘Wichcraft, Riverpark and Riverpark Farm. He was trained as a chef at the French Culinary Institute and spent his early professional years cooking at some of New York’s premier restaurants including Union Square Café, Savoy and Lespinasse. He is an active Board Member of New York City’s Greenmarkets. He shares his views on food, hospitality and entrepreneurship at Chefrepreneur.com.

New York Times best-selling author of The Sharper the Knife the Less You Cry, The Kitchen Counter Cooking School and Burnt Toast Makes You Sing Good. She trained at the famed Le Cordon Bleu in Paris.

A two-time James Beard Foundation award winning celebrity chef with over 30 years of leadership experience advocating for a more sustainable food system. He is Founder, President and CEO of Wholesome Wave, Co-Founder of the Chefs Action Network, as well as Founder and Partner with the late actor Paul Newman of the former Dressing Room Restaurant. He's also the author of three cookbooks and a variety of articles focused on sustainable food systems and social equity through food.

Author and the host of Food Networks’ Barefoot Contessa. Though Garten has no formal training, she is known for designing recipes with an emphasis on fresh ingredients and time-saving tips. Later, she relied on intuition and feedback from customers and friends to refine her recipes.

President and CEO of Legal Sea Foods, a Boston-based restaurant chain. Berkowitz started working in the family fish market in Inman Square, Cambridge at the age of 10 and held a variety of roles prior to becoming President and CEO in 1992. Among numerous awards and recognitions, Berkowitz was named a James Beard “Outstanding Restaurateur.”

White is recognized as one of the leading authorities on New England food and its history, in particular seafood, known widely for his Summer Shack restaurants. White has won numerous awards over the years, including Best Chef in the Northeast from the James Beard Foundation.

Cookbook author and resident chef for on WBUR’s Here and Now. Gunst’s self-described philosophy towards cooking is to keep it simple and fresh, allowing quality ingredients to shine. She has received numerous nominations from the International Association of Culinary Professionals Cookbook Awards.

A restaurateur and owner of the Davio’s restaurant group and the Avila’s restaurant in Boston. In 2008, he was inducted into the Massachusetts Restaurant Hall of Fame. DiFillippo is also known for being involved in the community and serves on several non-profit boards.

Chef Marc Forgione is the Chef/Owner of Restaurant Marc Forgione in New York City and American Cut and the Co-owner of Khe-Yo. He is one of the seven Iron Chefs appearing on Food Network's Iron Chef America and recently released his first cookbook.

Senior Vice President Cabot Creamery Cooperative. MacDonald earned her cooking chops baking for her adopted family at a respite house in Vermont. Her volunteer role is to prepare meals for residents and celebrate their end-of-life with family and friends that visit.

Pulitzer Prize winning columnist Ellen Goodman has spent most of her life chronicling social change and its impact on American life. Now, as what she calls a "recovering journalist", she is trying to make social change by founding The Conversation Project, a public engagement campaign to make everyone's wishes for end-of-life care expressed and respected. The project believes that it's crucial to talk about our wishes at the kitchen table with the people we love long before there is a medical crisis. So, with this cookbook we set the table, share stories and comfort food!

Founder of deathoverdinner.org and drugsoverdinner.org. Former restauranteur and co-founder of Clarklewis, Family Supper and the Gotham Building Tavern in Portland, Oregon. His writings have appeared in GQ, Food and Wine and Food Arts. Hebb is credited with starting the underground “pop-up restaurant” food movement. 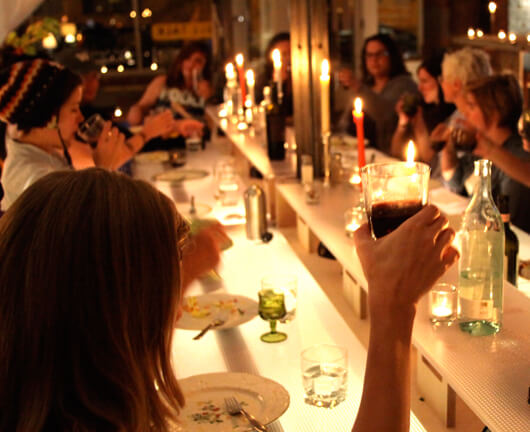 Let the legacy and hearts of your loved ones live on. Share their recipes and stories.