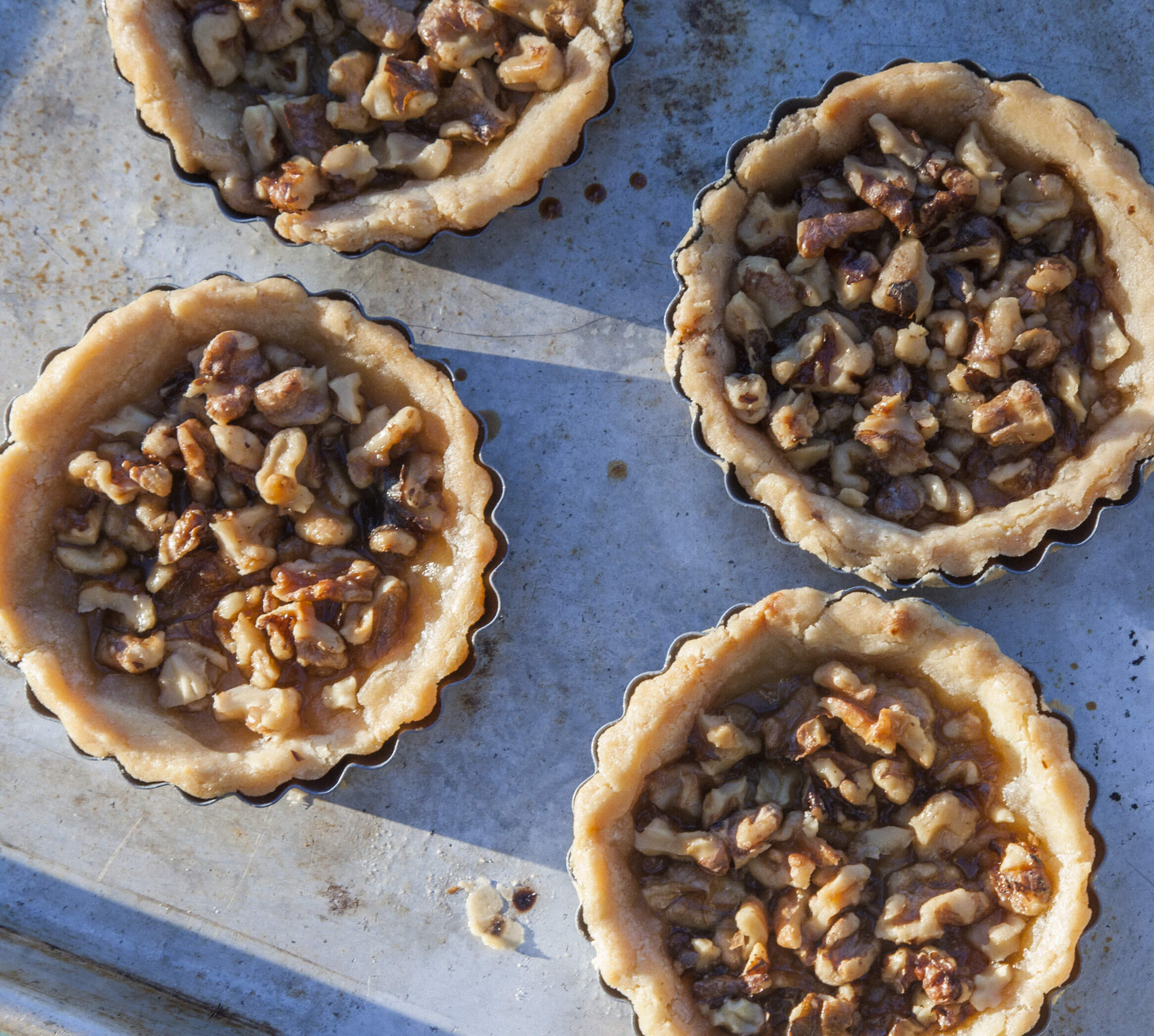 Whenever I bake I have a pair of remarkable, tall, active women in my mind’s eye: my grandmother and her daughter, my mother. And then there’s the echo of my mother’s identical twin, my aunt Wendy, who has outlived both of them.

My grandmother, who traveled from England after the First World War to marry my granddad and live with him in a log cabin in northern British Columbia, hated cooking. Or perhaps it’s fair to say that she disliked it but just cooked anyway: three meals a day for her husband and three children, plus guests who came by, plus men who came in the summer to help with the haying. That’s a lot of cooking in a lifetime.
She made white pan loaves, baking them in her wood-fired cast-iron cookstove. And she made delectable treacle tarts: a simple pastry crust topped with golden syrup and a skinny gestural lattice of pastry to use up the scraps. My mother, who died long ago, rarely made pastry but did make all our bread when I was growing up. Her breads were slow-rise doughs, made with a mix of whole wheat and white flours, and often included sunflower seeds and a touch of blackstrap molasses. She baked them in round apple juice cans so they came out like cylinders and made round sandwiches. Like her mother she measured by eye, and each time the bread was slightly different.

The interesting thing about the breads my mother, grandmother, and aunt made was that they were so distinctive. Even with a plain white loaf, I could always tell whether it was Grandmum’s or Aunt Wend’s or my mother’s bread that I was eating. Each had her own style, and though they seemed similar in their casual approach and their handling of the dough, the results were personal.
And so when I make treacle tart, I think about my grandmother; and when I make bread, I picture my mother. My tarts are not as delicate or beautiful as my grandmother’s were. My bread is like my mother’s, but different again. Thinking about tradition through the generations makes me realize that each of us who participates in this world of cooking and baking has a signature—a distinct personality and style—that comes through in the food we make.

It’s a form of transmission and a wonderful means of remembrance.

This version of treacle tart is my adaptation of my grandmother’s. She used Lyle’s Golden Syrup to make hers. Do not substitute corn syrup. If you can’t find golden syrup, then use maple syrup instead. Most often I make the pastry with whole grain Red Fife flour, but you can use all-purpose or pastry flour if you wish.